Summary: Households have 30% of their financial assets in equities, the same proportion as they held at bull market peaks in the 1960s and in 2007. Does this mean another bear market is imminent? No. Two of the last three times the purportedly significant 30% level has been reached, stocks gained another 40-60%. The level is statistical noise.

There are better ways to measure investor sentiment and valuations, both of which, like the equity proportion, rise during bull markets and fall during bear markets.

Chances are you have seen a chart like the one below. It shows US households' equity ownership as a proportion of total household financial assets (blue line) versus the stock market (red line).  The message is usually this: US households now own more equity than at the stock market peak in 2007. It's a sign that another bear market is imminent. Enlarge any chart by clicking on it.

Is it a sign the bull market is at an end? The short answer is no.

It's true that households' "equity proportion" of their financial assets equalled 29% in June 2007 and that it is now 30%. It's also true that bull market peaks in both early 1966 and late 1968 corresponded to the equity proportion reaching 30% and 31%, respectively. Aside from the 1998-2000 tech bubble blow off top, that 30% area has seemed to be where bull markets have died.

But there are two problems with this line of thinking.

So to summarize, bear markets have started when the equity proportion was much lower than now and strong bull markets have continued much higher over a period of years from the current level. This makes this measurement effectively useless at predicting turns in the stock market.

The second, and bigger, problem with the equity proportion is that it doesn't represent what its proponents believe it represents. The explicit interpretation of this chart is that investors' appetite for stocks is saturated when their equity ownership reaches 30% of their total financial assets. With no fuel left to propel the market higher, investors then sell stock into a bear market. And when their equity ownership reaches an exhaustive low, equities bottom and then begin a new bull market.

But all available research shows the opposite to be true, that the average investor has terrible market timing, buying too much near tops and refusing to buy near bottoms. This is the main reason why the average investor so dramatically underperforms the indices over time (data from Black Rock).

So why do these curves seem to follow each other so closely? Because they are both are measuring the same thing.

If the value of households' equity ownership were mostly driven by buying and selling stocks, then we should have seen massive selling of equity mutual funds and ETFs from late 2007 to early 2009. We didn't. Between September 2007 (SPX peaked in October 2007) and February 2009 (SPX bottomed in March 2009), investors actually added $35b in new money to equity funds. During those 17 months, more months had inflows (9) than outflows (8). 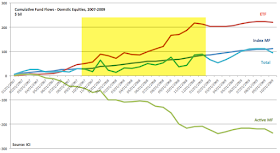 This is significant. The theory is that investors are too exuberant when the equity proportion reaches 30%, that they have effectively used up all of their risk appetite and thus the fuel needed to propel the market higher. But that is clearly not the case. Investors continued to add to equity funds even after the 30% level had been reached. The proportion only fell because the value of their existing holdings fell.

The importance of the stock market itself in determining the value of households' equity ownership (net assets) is apparent in the next two charts. On net basis, investors added new money to funds but the net asset value plummeted as the bear market unfolded. Net assets have since rebounded much more strongly than fund inflows would imply (data from Yardeni). 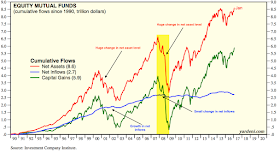 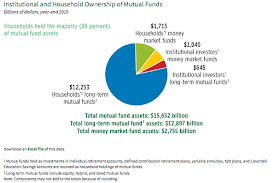 None of this is say that investors today are not bullish or that stock valuations are not high. There is good data to support both of these conclusions. There is also good reason to suspect that longer term equity returns are lower when equity valuations and sentiment are high (read our take on this here).

The equity proportion of households' financial assets adds little to this: it's measuring the same thing as the appreciation of the stock market itself. You would expect the equity proportion to be high after an 8 year bull market and low after a bear market.  That equity bull markets in the past 50 years have historically ended when the equity proportion was 18%, 23%, 30% and 36% - and that equities have gained another 40-60% after the purportedly significant 30% level has been reached - tells you how little value this measure adds.

A final point: it might seem strange that equity fund flows can be positive during a bear market. But we have seen something like this throughout the past decade. Since 2009, the best equity market performance has taken place when fund flows are strongly positive. That can be seen in the chart below: strong inflows in 2009-11 and 2013-14 coincided with gains of 100% and 50% in SPX, respectively. Fund outflows between April 2011 and November 2012 coincided with the indices producing no net gains and suffering a near bear market in August 2011. The same happened between March 2015 and October 2016: almost no net gains and several large drawdowns of more than 10%. The strong rally in the SPX since the election coincides with $65b in net inflows (data from ICI).

If you find this post to be valuable, consider visiting a few of our sponsors who have offers that might be relevant to you.
Urban Carmel at 8:54 AM
Share
‹
›
Home
View web version