Summary: A tailwind for the rally over the past year has been the bearish positioning of investors, with fund managers persistently shunning equities in exchange for holding cash.

Sentiment has turned bullish.  Optimism towards the economy has surged to a 2-year high and profit expectations are near a 7-year high.  As a result, global allocations to equities rose to a 2-year high in March and "risk appetite" is also at a 2-year high. All of this suggests the big tailwind for equities has now dissipated. The one remaining positive is the high cash balance at funds.

Europe and Japan are now the most overweighted equity markets on a relative basis. Allocations to the US have dropped as the region has underperformed so far in 2017; this is where US equities typically start to outperform again. The weighting towards emerging markets has jumped in the past two months; this is now back to where the last two rallies in that region have started to fade.

Findings in the bond market are still of greatest interest. Inflation expectations are at 13-year highs, a level at which yields have reversed lower in the past.  Fund managers' allocations to global bonds fell to a more than 3-year low in March, a level which has often marked a point of capitulation.

For the fourth month in a row, the dollar is considered the most overvalued in the past 11 years. Under similar conditions, the dollar has fallen in value in the month(s) ahead.

Among the various ways of measuring investor sentiment, the BAML survey of global fund managers is one of the better as the results reflect how managers are allocated in various asset classes. These managers oversee a combined $600b in assets.

The data should be viewed mostly from a contrarian perspective; that is, when equities fall in price, allocations to cash go higher and allocations to equities go lower as investors become bearish, setting up a buy signal. When prices rise, the opposite occurs, setting up a sell signal. We did a recap of this pattern in December 2014 (post).


Let's review the highlights from the past month.

Cash: Fund managers' cash levels dropped from 5.8% in October 2016 to 4.8% in March. Recall that 5.8% was the highest cash level since November 2001. Cash remained above 5% for almost all of 2016, the longest stretch of elevated cash in the survey's history. Some of the tailwind behind the rally is now gone but cash is still supportive of further gains in equities. A significant further drop in cash in the month ahead, however, would be bearish. Enlarge any image by clicking on it. 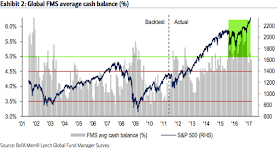 Global equities: Fund managers were just +5% overweight equities at their low in February 2016; since 2009, allocations had only been lower in mid-2011 and mid-2012, periods which were notable bottoms for equity prices during this bull market. Allocations in March have jumped to +48% overweight, a 2-year high. This is now well above neutral (0.8 standard deviation above the long term mean). Outside of 2013, over +50% overweight has historically been bearish (dashed line and shading). 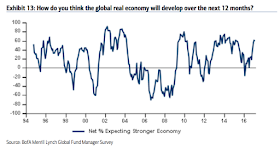 Similarly, 57% expect better profits in the next year, a 7-year high. This also explains their renewed enthusiasm for equities. 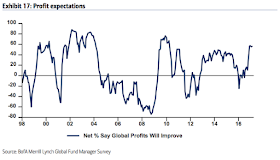 US equities: US exposure had been near an 8 year low during the past year and a half, during which US equities outperformed. US equities had been under-owned. That changed in December, with fund managers becoming +13% overweight, and they remained overweight through February. As we have repeated in recent months, bearish sentiment was no longer a tailwind for US equities, and US equities have since underperformed their global peers. The good news is that fund managers dropped their allocation back to neutral in March: +1% overweight (0.2 standard deviations above its long term mean).  This is where US equities typically start to outperform again. Above +20% overweight and sentiment typically becomes a strong headwind (dashed line). 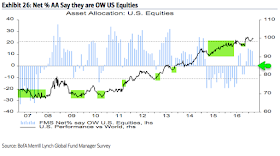 European equities: Fund managers had been excessively overweight European equities in 2015-16, during which time EZ equities underperformed. That changed in July, with the region becoming underweighted for the first time in 3 years. That has dramatically improved to +27% overweight in March, an 11-month high. This is above neutral (0.5 standard deviations above its long term mean).

Japanese equities: Allocations to Japan had been falling in 2016 after excessive bullishness in 2015. Allocations fell to -8% underweight in September, the lowest since December 2012. Now, allocations have jumped back to +22% overweight. This is 0.6 standard deviations above its long term mean. Bullish sentiment is close to becoming a headwind (dashed line) 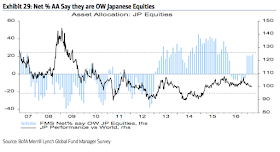 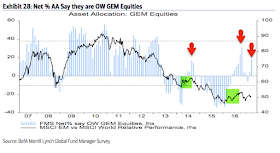 Global bonds: Fund managers are -65% underweight bonds, a fall from -35% underweight in July (which was near a 3-1/2 year high allocation). This is 1.2 standard deviations below its long term mean as well as a more than 3-year low. A capitulation low in the past has often occurred when bonds were -60% underweight (arrows and dashed line). In other words, bonds are now a contrarian long. Note the failure in 2013.

Of note, fund managers' inflation expectations are at the highest level in 13 years. This explains some of the sell off in bonds in the past half year. It's notable that current levels have marked at least a short-term reversal point in yields in the past (lower panel). 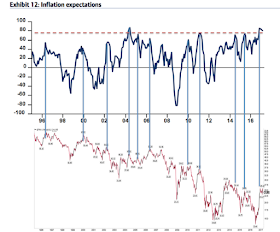 Similarly, fund managers' growth expectations are at the highest level since early 2011, at which time yields fell (highlights). 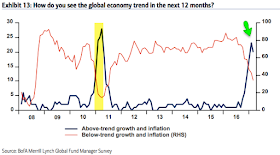 Commodities: Allocations to commodities remain near a 4-year high (+1% overweight). This is 0.3 standard deviations above its long term mean.  In comparison, a year ago in February 2016, allocations were near one of the lowest levels in the survey's history (-29% underweight). The improvement in commodity allocations goes together with increased macro optimism. 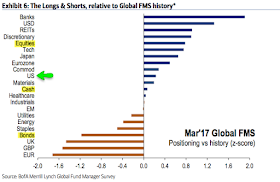 Fund managers' risk appetite had been well below the mean during 2016; during the current bull market, risk appetite had only been materially lower in mid-2011 and 2012, relative lows from which equities rose strongly in the following months. That has now changed, with risk appetite at a 23-month high. Risk appetite is the average of fund managers cash, investment horizon and investment risk (e.g., equity allocation and sector weighting). 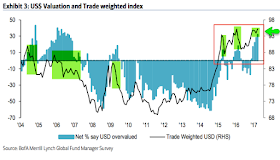 Survey parameters are below.


If you find this post to be valuable, consider visiting a few of our sponsors who have offers that might be relevant to you.
Urban Carmel at 12:59 PM
Share
‹
›
Home
View web version