Time To Not Freak Out About Debt Again

Summary: Debt is a perennial worry.  It's a natural human tendency to think of debt as bad, that by incurring debt we are living beyond our means. But much of what you hear about debt in the US is hyperbole. Here are the facts:

Household debt has fallen in the aftermath of the Great Recession: on a per capita basis, it's back to the same level as 14 years ago. Households' debt relative to their net worth is as low now as in 1985. For all the consternation about the threat posed by student loans, their default rates are actually falling.

Corporate leverage today is not materially different than it was in 1993 or 2003, i.e., early in two expansion cycles. The delinquency rate on corporate loans is lower than at any time during the prior three expansion cycles. High yield spreads are falling and default rates are well below average.

The "tax reform" bill signed in 2017 is forecast to further expand the federal debt.  But examples from around the world do not show a strong correlation between federal debt and economic growth over the next 5-10 years. For all the hand wringing about high federal debt, the interest cost of that debt is just 1.3% of GDP, as low as during the halcyon days of Eisenhower and Elvis.

Like most people, you're probably worried about the amount of debt in the US.  We seem to be going broke. Enlarge any chart by clicking on it. 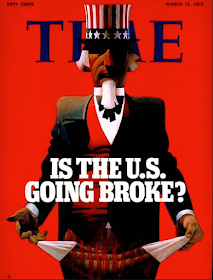 Debt is a perennial worry. At the dawn of the massive global expansion in the early 1980s, there was ubiquitous concern about deficits and leverage. That was also true 20 years ago, 10 years ago, and today (from Time, Newsweek and John Mauldin). 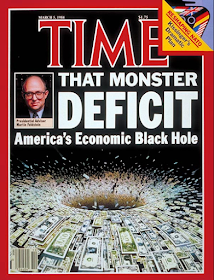 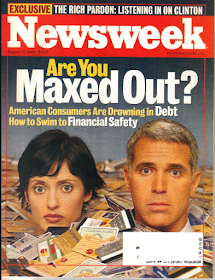 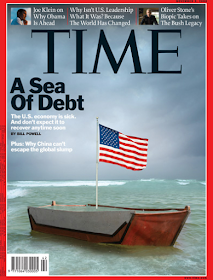 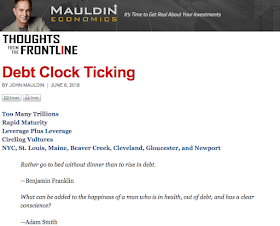 It's a natural human tendency is to think of debt as bad, that by incurring debt we are living beyond our means. That may feel especially true in the wake of the Great Recession, which was in part the result of excessive leverage. All else equal, most would prefer low leverage: this implies easier debt servicing (risk) and the ability to assume greater debt in the future to fund consumption.

So, do current US debt levels pose a risk to the economic expansion?

We looked at that question in detail two years ago (Has US Debt Reached A Tipping Point?). This post updates that analysis with new data.

For background, about half of total US debt is federal and roughly a quarter each is corporate and household. State and local debt is relatively minor (chart from mybudget360.com). 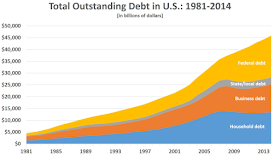 Here's what the latest data says about household, corporate and federal debt.

A healthy consumer balance sheet is fundamental to a healthy economy. Consumer spending makes up nearly 70% of total GDP, 4 times larger than either government spending or business spending.

Household debt has fallen in the aftermath of the Great Recession. Expansions are almost always accompanied by consumption funded by increasing household debt. This one has not. This, in part, explains why the recovery has been slower than prior expansion cycles. Household debt per capita is now at the same level as it was 14 years ago (2Q2004). This was early on in the cycle's expansion.

The best way to measure leverage is the ability of (a) income to cover interest and (b) assets or equity to cover liabilities. 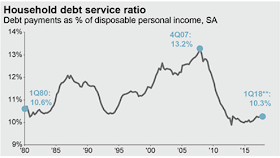 Household assets are roughly 7 times larger than total liabilities. Even if asset values were to return to the lows of 2009, coverage would be nearly 4.5 times current liabilities (chart from JPM). 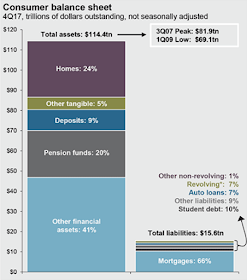 Households' debt relative to their net worth (i.e., assets net of liabilities, or equity) continues to decline - unlike prior expansionary periods - and is as low now as in 1985, early on in an expansion cycle that lasted another 15 years before encountering its first major disruption.

Household loans more than 30 days late continue to fall. There is little evidence that consumers are failing to meet their debt obligations (chart from Calculated Risk). 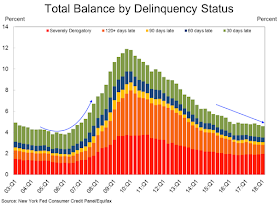 Nearly 70% of household's debt is mortgage-related. Auto (7%) and student (10%) loans are relatively minor. For all the consternation about the threat posed by student loans, their default rates are actually falling (from the WSJ, Why Student Loan Delinquency Is Falling). 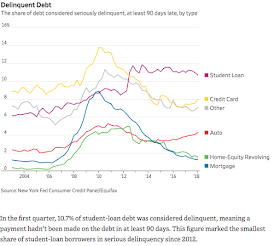 Net, it is hard to see the case for consumer debt being a worrisome risk at present. In fact, the current multi-decade lows in consumer leverage and loan delinquencies are typical of the early stages of an economic expansion. Given the importance of consumer spending to overall economic growth, current debt levels are likely more of a tailwind for the economy than an impending risk.

It is accurate to say that leverage in the corporate sector has increased in the past 4 decades. Companies did not use much debt prior to the 1980s, due to less developed debt markets and higher interest rates.

But most of the subsequent change in corporate leverage had already taken place by the early 1990s. Since then, leverage has largely stabilized. Corporate leverage today is not materially different than it was in 1993 or 2003, i.e., early in two expansion cycles.

More to the point, it is hard to say that corporate leverage is excessive. In the chart above, corporate net worth (i.e., assets net of liabilities, or equity) is about 4 times larger than debt. That is not onerous coverage.

Interest coverage is also not onerous. Companies in the S&P 500 can cover interest costs 7 times with earnings, a more comfortable margin than companies enjoyed at any time in the 1990s and 2000s (from JPM). 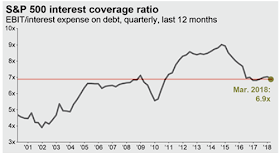 The delinquency rate on corporate loans reached an all-time low in 2014. Rates crept slightly higher in 2015 but have fallen again to just 1.1% over the past two years, lower than at any time during the prior three expansion cycles. Corporations are not finding it difficult to meet their financial obligations.

High yield leverage is essentially unchanged over the past 20 years, especially outside of the energy sector (from Alliance Bernstein).

High yield spreads are falling and default rates are well below average. There is little sign of stress in this end of the debt market (from JPM). 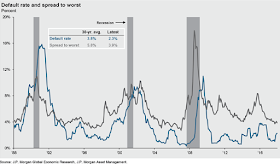 A popular way to measure relative corporate debt is to compare it to GDP, but there are many problems with this.

First, GDP is national output, so this ratio tells you nothing about the ability of corporations to cover either interest expense or the value of liabilities. This is a basic conceptual fault.

Second, about half of the sales of the S&P 500 are now derived outside the US. The importance of ex-US sales is growing, so looking only at US GDP increasingly overstates leverage with time (from Haver). 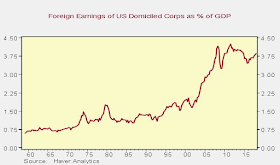 Third, company profit margins have more than doubled since the 1980s making coverage easier. Comparing debt to GDP (akin to sales) ignores this and so it increasingly overstates leverage with time (from Yardeni).

Finally, debt should be looked at on a net cash basis; this is material as cash levels have risen dramatically in the past 20 years. Debt to GDP ratios ignore cash (chart from JPM). 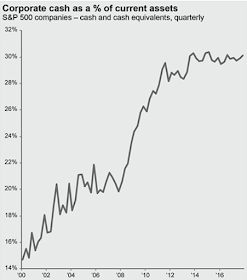 Net, corporate leverage is not materially different now than either 10 or 20 years ago. Interest coverage is better than at any time in the 1990s or 2000s. There are no significant signs of stress in corporate loans, indicating that companies are not having difficulty meeting their obligations. Objectively, it is hard to see the case for current corporate debt being a worrisome risk at present.

Federal debt is the accumulation of annual budget deficits which in turn result from spending in excess of tax revenue. Federal debt started to rise in the early 1980s and rose materially in the run-up to, and in the aftermath of, the GFC. The "tax reform" bill signed in 2017 reduces federal revenues and is forecast to further expand the federal debt (from JPM). 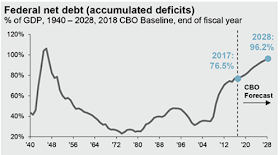 A large majority of economists believe the "tax reform" bill will not raise economic growth (corporations have abundant cash and access to inexpensive financing so their investments are not capital constrained).

But the more basic question is whether federal debt is excessive and a risk to future growth or stability. The answer is no. Examples from around the world do not show a strong correlation between federal debt and growth over the next 5-10 years (from Quartz here and CBPP). 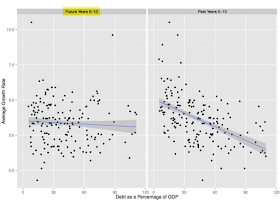 Japan has the highest federal debt/GDP in the developed world. That ratio crossed over 100% in 1996. In the next decade, Japan's real GDP grew 11%. That's not strong growth, but it comes within the context of Japan's well known aging population. In fact, if you look at the growth in Japan's GDP relative to its working age population, it looks very similar to the US over the past 25 years (chart from NYT). 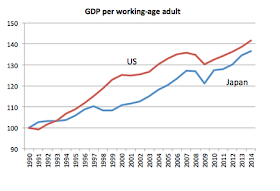 If GDP growth is greater than interest costs plus new deficits, then the debt/GDP ratio will stabilize, all else being equal. Right now, the US government can borrow for 10 years at a 0.7% real interest rate; in comparison, real GDP growth was 2.8% in 1Q2018 (chart from JPM). 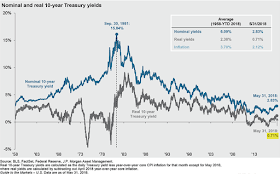 For all the hand wringing about high federal debt, the interest cost of that debt is very small. As a share of GDP, it is just 1.3%. This is as low as during the halcyon days of Eisenhower and Elvis. Interest coverage is a non-issue.

Net, while US federal debt/GDP has grown over the past 30+ years, leverage ratios are not high and there is no empirical evidence suggesting current debt on its own is a risk to future growth. Again, the natural human tendency is to prefer that debt was lower as it means greater flexibility to fund growth in the future. We are in that camp as well. But, objectively, it is hard to see the case for current federal debt being a worrisome risk at present.

In our earlier post on debt (here), we addressed several misunderstandings about federal debt, including why:


Federal debt is not like household debt. For most of the past 220 years, the US government has maintained a growing balance of debt. It is not suddenly our children's responsibility to pay this back.

Federal debt is not impoverishing the nation. Your savings account likely includes government bonds that pay valuable interest from which you benefit.

The US is not becoming Greece. What has happened to Greece has almost no applicability to the US.

In summary, debt is a perennial worry, but much of what you hear about debt in the US is hyperbole. Here are the facts. Household debt has fallen in the aftermath of the Great Recession and debt relative to net worth is as low now as in 1985. Corporate leverage today is not materially different than it was in 1993 or 2003, i.e., early in two expansion cycles. The "tax reform" bill signed in 2017 is forecast to further expand the federal debt, but there is no strong correlation between federal debt and economic growth over the next 5-10 years.


If you find this post to be valuable, consider visiting a few of our sponsors who have offers that might be relevant to you.
Urban Carmel at 4:00 PM
Share
‹
›
Home
View web version