Low Odds of a Big Fall in December

Bond yields are falling, as are commodity prices. Both NDX and RUT are starting December down more than 1%. Is a December swoon set to trigger?

Based purely on seasonal tendencies, the odds of a steep fall in equities through the end of the year are low.

According to the Stock Traders Almanac, December is the single best month for SPX (since 1950) and RUT and the second best month for NDX (post). Whether you look at the last 20, 50 or 100 years, December has averaged gains for SPX (chart from Bespoke). 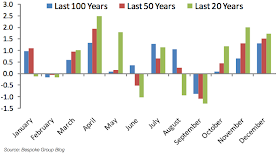 If the indices are set to fall intra-month, those losses are likely to occur in the next two weeks. In the past 30 years, the first half of December has more often been weak, but those losses have been more than reversed in the second half of the month (chart from seasonalcharts.com). 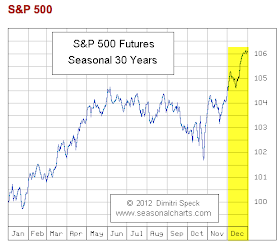 Since 1980, SPX has been higher in December 82% of the time when the index has been in an uptrend (defined as above a rising 13 month moving average). Moreover, the losses have normally been less than 1% (1980, 1983 and 2007). In the charts below, blue lines are gains in December, red lines are losses and dashed lines are close to unchanged.

The only two times SPX closed down more than 1% in December, those losses were fully recovered in January. SPX lost 1.5% in 1996. The biggest December loss was in 1986 (2.8%) in the wake of Irangate.  Put another way, the odds of a loss greater than 1% through the end of the year are about 7%.

Note, that we are referring here only to the monthly change, from open to close. That doesn't mean SPX won't suffer a large drawdown. Those are reasonably common in December; in 2011, SPX fell nearly 5% intra-month before finishing higher. December has an average drawdown of 3.7% (post).


If you find this post to be valuable, consider visiting a few of our sponsors who have offers that might be relevant to you.
Urban Carmel at 1:25 PM
Share
‹
›
Home
View web version