January Macro Update: 2018 Employment Was The Second Best Since 2000

Summary: The macro economic story has started to change. The data from the past month continues to mostly point to positive growth, but there is a very important exception: weakness in housing is apparent. If this persists and other measures, especially employment, start to also weaken, a recession in 2019 is possible.

For now, the bond market sees continued growth. The yield curve has 'inverted' (10 year yields less than 2-year yields) ahead of every recession in the past 40 years (arrows). The lag between inversion and the start of the next recession has been long: at least 8 months and in several instances as long as 2-3 years. On this basis, the current expansion will likely last into mid-2019 at a minimum. Enlarge any image by clicking on it.

Likewise, high yield spreads have not blown out during the current market correction, and default rates remain well below average. This part of the bond market is not signaling trouble (from JPM). 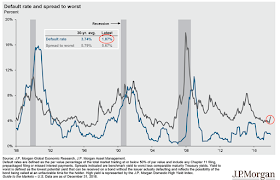 Similarly, real retail sales grew 2% and made a new all-time high (ATH) in November. The trend higher is strong, in comparison to the period prior to the past two recessions.

Housing is the primary concern. In the past 50 years, at least 11 months has lapsed between new home sales' expansion high (arrows) and the start of the next recession. So far, the cycle high was in November 2017, 13 months ago.

Unemployment claims have also been in a declining trend, but this may be changing. Historically, claims have started to rise at least 7 months ahead of the next recession: claims reached a 49 year low in mid-September, but have since risen the past three months. This measurement bears watching closely in the months ahead.

The Conference Board's Leading Economic Indicator (LEI) Index reached a new uptrend high in October. This index includes the indicators above plus equity prices, ISM new orders, manufacturing hours and consumer confidence. This index can fluctuate during an expansion but the final peak has been at least 7 months before the next recession in the past 50 years (from Doug Short). 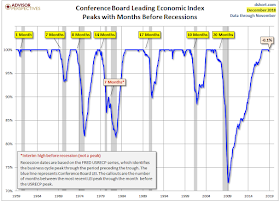 Why does any of this matter for the stock market?

Equity prices typically fall ahead of the next recession, but the macro indictors highlighted above weaken even earlier and help distinguish a 10% correction from an oncoming prolonged bear market. On balance, these indicators are not hinting at an imminent recession; new home sales is the only potential warning flag (its most recent peak was 13 months ago) but it has the longest lead time to the next recession of all the indicators (a recent post on this is here). 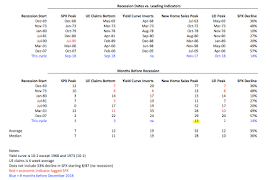 Here are the main macro data headlines from the past month:


Employment: Monthly employment gains averaged 220,000 in 2018 - the second best year since 2000 - with annual growth of 1.8% yoy.  Employment has been been driven by full-time jobs, which rose to a new all-time high in December.

Compensation: Compensation growth is on an improving trend. Hourly wage growth was 3.2% yoy in December, while the 3Q18 employment cost index grew 3.0% yoy, the highest growth in the past 10 years.

Inflation: The core inflation rate remains near the Fed's 2% target.

Our key message over the past 6 years has been that (a) growth is positive but slow, in the range of ~2-3% (real), and; (b) current growth is lower than in prior periods of economic expansion and a return to 1980s or 1990s style growth does not appear likely.

This is germane to equity markets in that macro growth drives corporate revenue, profit expansion and valuation levels. The simple fact is that prolonged equity bear markets almost always take place within the context of an economic decline. Since the end of World War II, there have been 10 prolonged bear markets, only 2 of which have occurred outside of an economic recession (read further here).

When the economy is expanding, the historical risk of a 10% annual decline in the stock market is just 4% (from Goldman Sachs). 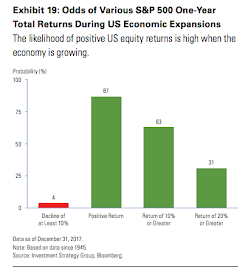 The highly misleading saying that "the stock market is not the economy" is true on a day to day or even month to month basis, but over time these two move together. When they diverge, it is normally a function of emotion, whether measured in valuation premiums/discounts or sentiment extremes.

We had expected macro data to be better than expected in 2H18, but it hasn't been. Macro data was ahead of expectations to start the current year by the greatest extent in 6 years. During the current expansion, that has led to underperformance of macro data relative to expectations into mid-year and then outperformance in the second half of the year (green arrows). 2009 and 2016 had the opposite pattern: these years began with macro data outperforming expectations into mid-year and then underperforming in the second half (red arrows). This is another watch out for 2019.

While the macro data is fine, a possible wild card is the escalation in trade war rhetoric, which reduces global demand, raises prices and eventually leads to lower investment (from St Louis Fed).

The December non-farm payroll was 312,000 new employees plus 58,000 in net revisions for the prior two months.

Why is there so much volatility? Leave aside the data collection, seasonal adjustment and weather issues; appreciate that a "beat" or a "miss" of 120,000 workers in a monthly NFP report is within the 90% confidence interval (explained here).

For this reason, it's better to look at the trend; in December, trend employment growth was 1.8% yoy. Until spring 2016, annual growth had been over 2%, the highest since the 1990s.  Ahead of a recession, employment growth normally falls (arrows). Continued deceleration in employment growth continues to be an important watch out.

Employment has been been driven by full-time jobs, which rose to a new all-time high in December (blue line), not part-time jobs (red line).

The labor force participation rate (the percentage of the population over 16 that is either working or looking for work) has stabilized over the past 5 years. The participation rate had been falling since 2001 as baby boomers retire, exactly as participation started to rise in the mid-1960s as this demographic group entered the workforce. Another driver is women, whose participation rate increased from about 30% in the 1950s to a peak of 60% in 1999, and younger adults staying in school (and thus out of the work force) longer.

Average hourly earnings growth was 3.2% yoy in December, the highest in 9-1/2 years. This is a positive trend, showing demand for more workers. Sustained acceleration in wages would be a big positive for consumption and investment that would further fuel employment.

For those who doubt the accuracy of the BLS employment data, federal individual income tax receipts have also been rising to new highs (red line), a sign of better employment and wages (from Yardeni).

Regardless of which data is used, real demand has been growing at about 2-3%, equal to about 4-5% nominal.

Stripping out the changes in GDP due to inventory produces "real final sales". This is a better measure of consumption growth than total GDP.  In 3Q18, this grew 2.9% yoy. A sustained break above 3% would be noteworthy.

The "real personal consumption expenditures" component of GDP (defined), which accounts for about 70% of GDP, grew 2.9% yoy in 3Q18. This is approaching the 3-5% that was common in prior expansionary periods after 1980 and prior to the great recession.

On a monthly basis, the growth in real personal consumption expenditures grew 2.8% yoy in November.

Real retail sales grew 2.0% yoy in November and made a new ATH. Sales fell yoy more than a year ahead of the last recession.

This expansionary cycle is not like others in the past 50 years. Households' savings rate typically falls as the expansion progresses; this time, savings has risen and remains at an elevated level.

The next several slides look at manufacturing. It's important to note that manufacturing accounts for less than 10% of US employment, so these measures are of lesser importance.

Core durable goods orders (excluding military, so that it measures consumption, and transportation, which is highly volatile) rose 2.8% yoy (nominal) in November. Weakness in durable goods has not been a useful predictor of broader economic weakness in the past (arrows).

Importantly, 74% of industrial production groups are expanding. A drop below 40% will imply widespread weakness that typically precedes a recession (from Tim Duy). 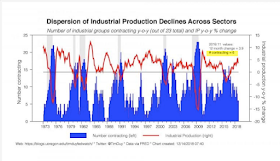 Weakness in total industrial production in 2015-16 was concentrated in the mining sector, with the worst annual fall in more than 40 years. It is not unusual for this part of industrial production to plummet outside of recessions. With the recovery in oil/gas extraction, mining rose 13% yoy in September.

Companies are often wrongly accused of underinvesting in lieu of greater share repurchases (buybacks). But capacity utilization is still under 80%, so there is plenty of room for production to expand within existing capacity.

Macro weakness is most apparent in housing. New housing sales fell 12% yoy in October after reaching their highest level in 10 years in November 2017 (due to the shutdown, November sales data is not available). Housing starts fell 4% and permits were flat yoy in November, with weakness in multi-family units the most pronounced. Overall levels of construction and sales are small relative to prior bull markets.

Second, housing starts fell 4% yoy in November. Starts in January were at the highest level of the past 11 years. The cycle high print has typically been well over a year before the next recession (arrows).

Single family housing starts (blue line) reached a new post-recession high in November 2017 but were 13% lower in November. Meanwhile. multi-unit housing starts (red line) has been flat over the past four years; this has been a drag on overall starts.

Despite steady employment, demand and housing growth, core inflation remains near the Fed's target of 2%.

The Fed prefers to use personal consumption expenditures (PCE) to measure inflation; total and core PCE were 1.8% and 1.9% yoy, respectively, last month. 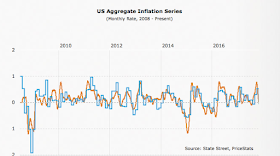 On balance, the major macro data so far suggest continued positive, but modest, growth. This is consistent with corporate sales growth.  SPX sales growth in 2019 is expected to be about 5% (nominal).

With the rise in earnings and the drop in share price, valuations are now below their 25 year average. The consensus expects earnings to grow about 8% in 2019. Even if this falls under 5%, equity appreciation next year can be driven by both corporate growth as well as valuation expansion (chart from JPM). 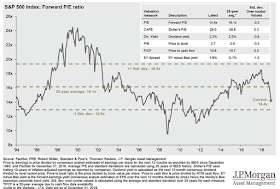 If you find this post to be valuable, consider visiting a few of our sponsors who have offers that might be relevant to you.
Urban Carmel at 9:43 AM
Share
‹
›
Home
View web version