Summary: This post reviews the main economic data from the past month.  The balance of the data continues to be positive. There is little to suggest the imminent onset of a recession.

The main negatives are:
Bottomline: the trend for the majority of the macro data remains positive. The pattern has been for the second half of the year to show increased strength. That appears to be the case in 2015 as well.

Prior macro posts from the past year are here.

Our key message over the past year has been that (a) growth is positive but modest, in the range of ~3-4% (nominal), and; (b) current growth is lower than in prior periods of economic expansion and a return to 1980s or 1990s style growth does not appear likely.

Modest growth should not be a surprise. This is the typical pattern in the years following a financial crisis like the one experienced in 2008-09.

This is germane to equity markets in that macro growth drives corporate revenue, profit expansion and valuation levels. The saying that "the stock market is not the economy" is true on a day to day or even month to month basis, but over time these two move together. When they diverge, it is normally a function of emotion, whether measured in valuation premiums/discounts or sentiment extremes. 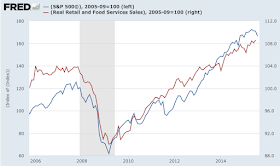 Let's review each of these points in turn. We'll focus on four categories: labor market, inflation, end-demand and housing. 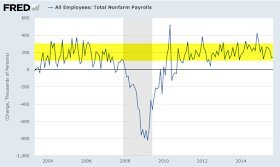 Why is there so much volatility? Leave aside the data collection, seasonal adjustment and weather issues, appreciate that a "beat" or a "miss" of 80,000 workers in a monthly NFP report is equal to just 0.05% of the US workforce.

For this reason, it's better to look at the trend; in September, trend growth was 2.0% yoy. Annual growth continues to be close to the highest since the 1990s.  Employment growth in 2015 has been better than at any time during the 2003-07 bull market. 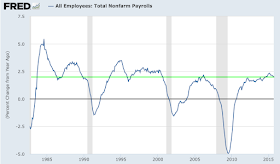 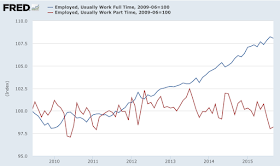 The labor force participation rate (the percentage of the population over 16 that is either working or looking for work) continues to fall. This has little to do with the current recovery; the participation rate has been falling for 15 years. Participation is falling as baby boomers retire, exactly as participation started to rise in the mid-1960s as this group entered the workforce. Another driver is women, whose participation rate increased from about 30% in the 1950s to a peak of 60% in 1999. 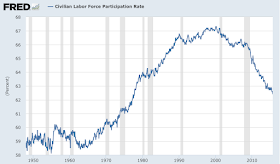 Average hourly earnings growth in September remained 2.2% yoy, near the top of the post-recession range. Sustained acceleration in wages would be a big positive for consumption. Not yet. 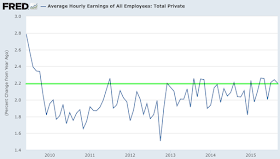 2Q15 employment cost index shows compensation growth was 2.1% yoy. This is down from 2.7% in 1Q15, which was the highest growth since the recession.

For those who doubt the accuracy of the BLS employment data, federal tax receipts are also accelerating (red line), a sign of better employment and wages (data from Yardeni). 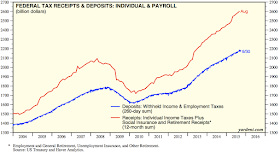 Despite steady employment growth, inflation remains below the Fed's target of 2%. 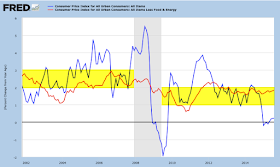 The Fed prefers to use personal consumption expenditures (PCE) to measure inflation; total and core PCE were 0.3% and 1.3% yoy, respectively, in August. Neither has been above 2% since 2Q 2012. 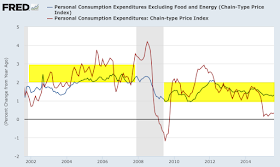 For some reason, many mistrust CPI and PCE. MIT publishes an independent price index (called the billion prices index). It tracks both CPI and PCE closely. 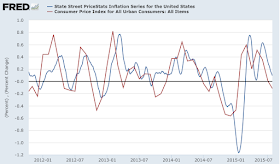 Regardless of which data is used, real demand has been growing at about 2-3%, equal to about ~3-4% nominal.

Stripping out the changes in GDP due to inventory produces "real final sales". This is a better measure of consumption growth than total GDP.  In 2Q15, this grew 2.5% yoy. A sustained break above 2.5-3.0% would be noteworthy. 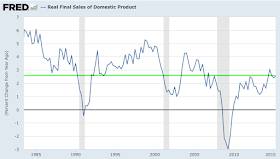 Similarly, the "real personal consumption expenditures" component of GDP (defined), the component which accounts for about 70% of GDP, grew at 3.3% yoy in 2Q15. The last two quarters have seen the highest growth rate in 8 years. This is approaching the 3-5% that was common in prior expansionary periods after 1980. 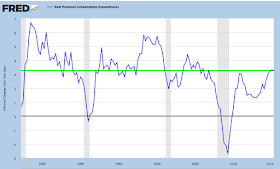 On a monthly basis, the growth in real personal consumption expenditures was 3.2% yoy in August. This is solid growth. 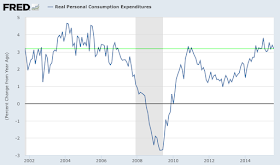 Real retail sales grew 1.9% yoy in the past month. The range has generally been centered around 2.5% yoy for most of the past 20 years. The latest month is therefore a bit below the middle of the range. 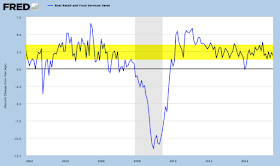 Retail sales this year have been strongly affected by the large fall in the price of gasoline. Retail sales at gasoline stations fell by 17% yoy. Retail sales excluding gas stations grew 4.4% (nominal) in August. 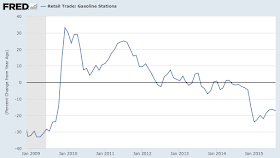 Core durable goods orders (excluding military, so that it measures consumption, and transportation, which is highly volatile) fell 4.5% yoy (nominal) in August. It grew 11.8% a year ago, so the yoy comparable is unfavorable (these will become favorable starting in October). During the heart of the prior bull market, growth was typically 7-13%. Weak growth in winter has been a pattern the past three years (arrows). 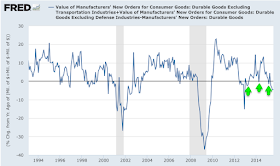 This is a nominal measure and thus negatively impacted by the fall in the inflation rate. On a real basis, growth continues to trend higher over the past year (blue line is real; gray line is nominal; chart from Doug Short). 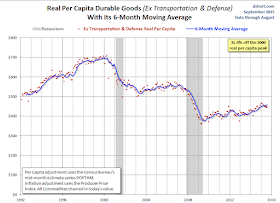 Industrial production growth was 0.9% in August. The manufacturing component (excluding mining and oil/gas extraction) grew 1.7%. The current growth is at the low end of the past 15 years' range (1.5-5%). It's a volatile series; manufacturing growth was lower at points in both 2013 and 2014 before rebounding strongly. 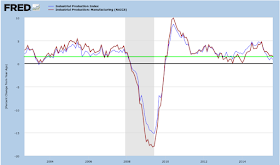 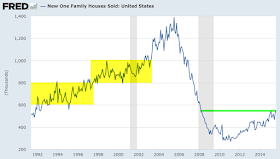 Second, overall starts in August were marginally lower than in June, which was a new 8 year high.  The annual growth rate was 17% yoy. The overall level of construction is well off those during the prior two bull markets, but the trend is clearly positive. 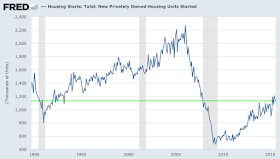 While housing starts were disappointing during the winter, they were not alarming. Building permits remained robust (red line) with June at a new 8 year high. 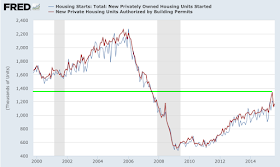 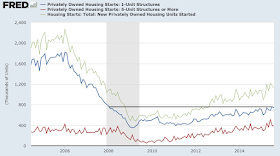 In summary, the major macro data so far suggest positive, but modest, growth. This is consistent with corporate sales growth.  SPX sales growth the past year has been positive but only about 2% (nominal) excluding energy.

With valuations above average, the current pace of sales growth is likely to be the limiting factor for equity appreciation. This is important, as the consensus expects earnings to grow 2% in 2015 and 12% in 2016.

Modest growth should not be a surprise. This is the classic pattern in the years following a financial crisis like the one experienced in 2008-09.

There has been a tendency for macro data to underperform expectations in the first half of the year and beat expectation in the second half. That pattern appears to be at work in 2015 as well.

If you find this post to be valuable, consider visiting a few of our sponsors who have offers that might be relevant to you.
Urban Carmel at 10:51 AM
Share
‹
›
Home
View web version