Interest rates are low, so stock valuations should be high.  After all, a lower discount rate means that company cash flows are worth more; hence, a higher stock price. And the higher yield offered by equities makes them more attractive than low yielding treasuries, another reason to pay up for stocks.

This is a very common view.  And its bolstered by the fact than interest rates have been falling for 30 years while stock valuations have mostly gone higher. These two seem to be inversely correlated. There must be a cause and effect reason behind it.

So, is this view correct? The short answer is no.

The chart below looks at valuations versus 10 year yields. Current yields (2.3%) have been associated with valuations over 20x and under 10x. Interest rates were higher in the 1990s and so were valuations (orange dots). Valuations have been under 10x when interest rates have been over 10% and under 3%.  There is no discernible correlation between rates and valuations at all (chart by Doug Short). 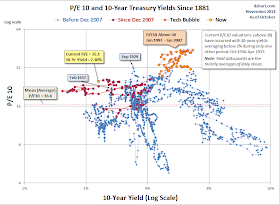 It's true that valuations have mostly been rising since the early 1980s, during which time interest rates have fallen. But if you were looking at the relationship in 1970, you would have seen the opposite correlation. Interest rates had been rising for 30 years, and so had valuations. This made sense to everyone at the time: when the economy and companies are growing faster, there is greater demand for money, so interest rates are higher. And bigger, faster growing profits make companies more valuable, so valuations are higher (chart from Robert Shiller). 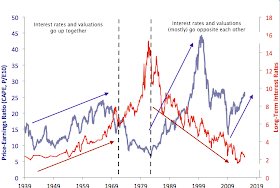 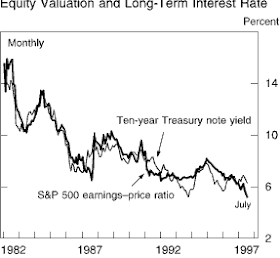 But there are several problems with this aside from those already raised above. Most importantly, it's empirically false that stocks will go higher when their yield is greater than those of bonds. Many bear markets have started when exactly this situation has existed. The arrows in the chart below mark the start of bear markets (data from Robert Shiller). 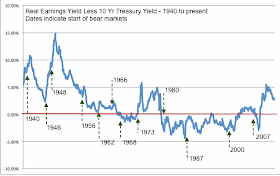 According to various research papers,  the correlation with future (10 year) SPX returns for Tobin's Q, Market Value/GDP or Shiller's PE10 is each about 60-70%. In comparison, the Fed Model has a correlation of only about 15%. In other words, its a poor predictor of when prices are too high, or too low, and are due to turn.

One of the better critiques of why the Fed Model makes little sense that we have read is from Philosophical Economics (excerpt below; the full post is here).

So, today's low interest rates do not justify higher valuations and there is no consistent historical relationship between rates and valuations. If rates continue to fall, that is not a reason to expect valuations to rise further.

That also means that, if rates were to begin to rise, valuations do not need to fall as the Fed Model suggests. In fact, the silvering to this story is that when the Fed eventually decides to raise rates, stocks should rise; stocks tend to appreciate after the first rise in rates (table from Goldman). 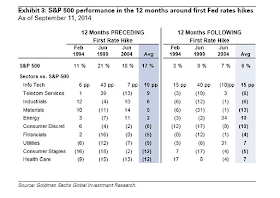 If you find this post to be valuable, consider visiting a few of our sponsors who have offers that might be relevant to you.
Urban Carmel at 9:05 AM
Share
‹
›
Home
View web version